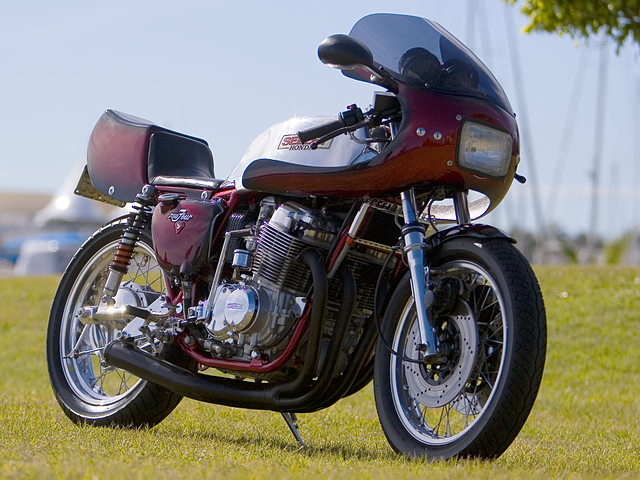 Back in the 80’s Steve Foster found an obnoxious looking bike in the back of a Gold Coast biker dealers showroom. The ugly duckling was a complete eyesore, but Steve recognised it for being one of only 7 Seeley Honda kits officially imported into Australia, and knew its potential. 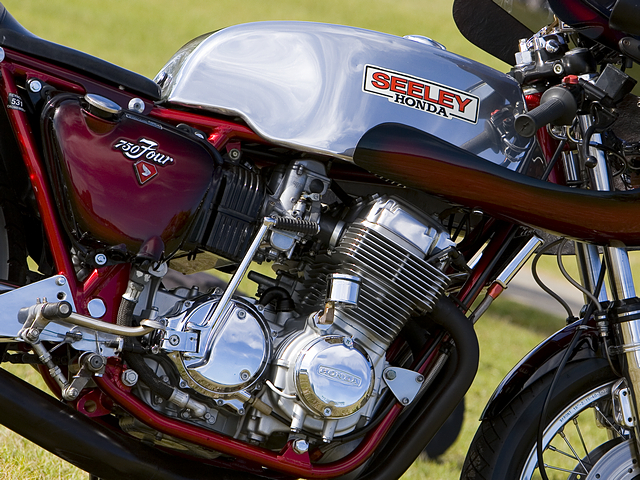 The bike wasn’t that old either. The frame was built in May of 1977 and this was 1980. How it got in such a state in its short lifetime is anybodies guess? Steve didn't waste anytime getting stuck into the rebuild. Another engine was sourced, from an equally rare Rickman Honda of all things, for $200 (quite a bit of coin, back in the day). The engine got stripped and rebuilt, and is mostly standard inside, with the exception of the oversize 810cc Arias pistons. The bike has been on the road since late 1980, and with the exception of a gearbox problem early on, has been totally reliable. 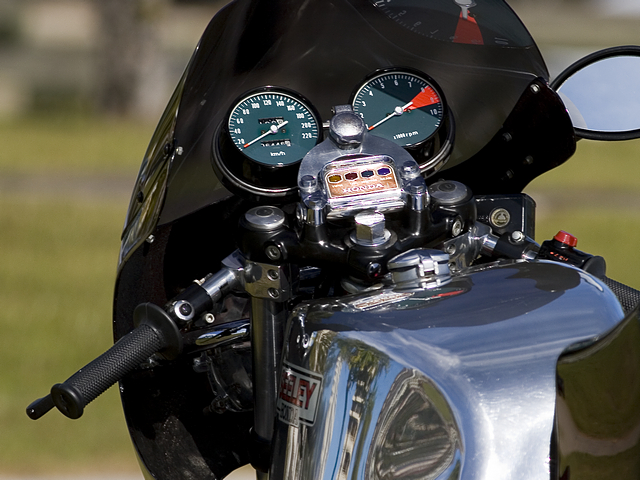 In the looks dept, the Seeley's cafe racer chic completely whitewashes the original Honda bodywork. Steve has shown this to full advantage with a candy apple red and black paint job which extends to the frame also. This particular bike has the single seat unit and 5.5gal alloy tank (as opposed to the smaller tank and double seat), and by rights it should also have the cast Lester wheels which were part of the kit Seeley sold. But Steve had a set of Akront rims laced to Honda centers. And you have to admit, they really suit the bike, original or not.
Steve reports the bike will happily cruise on 120mph all day if you want, and I do, but where am I gonna get away with it? 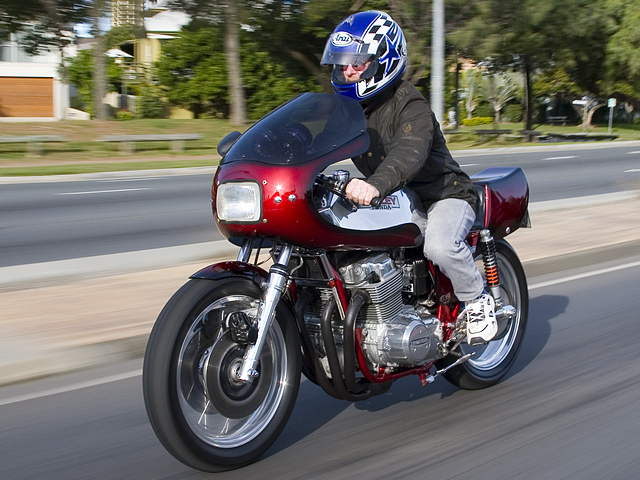 Seeley History
Colin Seeley was a side-car racer, and was well known for making chairs for AJS and Matchless singles, and Suzuki, Yamaha and Ducati race bikes. He did a short stint developing a 4-wheeled chassis for Sir Jack Brabham also.
After this Seeley decided to go back to bike frames and build them to suit the big engines coming from Japan. Seeley started with the Honda 750/4 motor, and in 1975 had a running example which was tested by Brands Hatch race officials at the final Superbike round in October of that year.
The advantages of the Seeley frame were lower centre of gravity, overall lighter weight, improved handling through racier geometry and a generally stiffer chassis (tapered roller head bearings rather than ball bearings), lower seat height, and more room in the frame for servicing. No need to drop the engine out for top end work.
Two options of bodywork were eventually available. The single seat unit with hand made 5.5gal aluminium tank, and the later dual seat unit with 4.5gal tank. The bikes have a typical café racer chic.
A single seater could be purchased for £1295 which obviously included the tank and fibre-glass body panels (fairing, front guard, seat unit, side panels) but also the Lester wheels, Hunt discs and Avon Roadrunner tyres.
Chassis geometry is a 28° steering angle, 1438mm wheelbase, seat height was 765mm. Kerb weight is approximately 218kg, which is about 20kg lighter than a standard Honda 4.
Seeley went on to produce frame kits for other Japanese manufacturers, most notably and probably more famously is the Kawasaki Z 900 series engine. And he competed successfully in his market with manufacturers such as Egli, Rickman and Nico Bakker to name a few.
Posted by SHOTZ Photography at 21:13